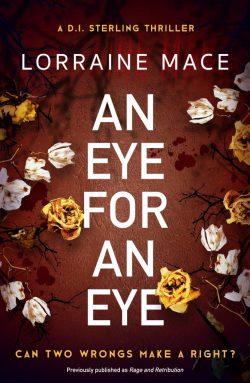 Previously published as Rage and Retribution

CAN TWO WRONGS MAKE A RIGHT?

From start to finish this book kept me fully engrossed. It had everything that I want in a crime thriller to keep me hooked. Mystery, murder, torture, intrigue and a well thought out plotline.

I really, really enjoyed this novel

This is my first foray into the DI Sterling series and I must admit that I am going to hunt down and consume the rest because I really, really enjoyed this novel. Not reading any of the other books in the series had little impact, rather the relationships between characters are so well constructed that I am eager to read the earlier novels to see how they have developed and grown.

I was warned that reading the first few pages would make me squirm and I did! Another Great story and characters. Kept me guessing to the end, I really had no idea who would turn out to be the villain. I like the way the characters are developing and look forward to the next book. Recommended.

Edge of your seat

This is the fourth book in the D.I. Paolo Sterling series. Yet again Lorraine Mace keeps you on the edge of your seat, trying to guess the perpetrator. This is another fast, well plotted read.