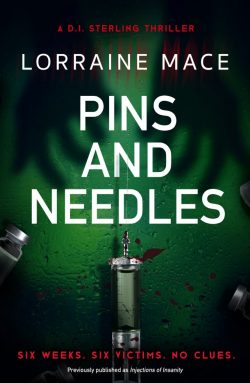 Previously published as Injections of Insanity

When a leading psychiatrist is found murdered by insulin injection in his home, with a note bearing this threat, Detective Inspector Paolo Sterling and his team find themselves in a race against time to stop a killer from striking again. But with so little to go on, trying to find the next victim is like trying to find a needle in a haystack.

As the body count rises, and the investigation reaches its critical point, Paolo and his team grapple with what could be their most complex case to date. But just when they think the game is up, they make a shocking discovery that leads them close to home.

With so much at stake, can DI Sterling uncover the truth before it’s too late? Or will those closest to him pay the price?

Whilst this story was not as dark as the previous two in this series, it felt more intense. As DI Sterling investigated the case, he kept hitting brick wall after brick wall and you could sense he was up against the clock the catch the killer. The use of insulin was a unique weapon of choice and I learnt that something that would save lives would kill others horrifically.

I’m already a huge fan of DI Paolo Sterling mysteries but I think this is my favourite book in the series so far!

This was a fascinating and beautifully written page-turner, with believable, interesting and sympathetic characters. The author has avoided the character cliches, and created an exciting and frighteningly credible plot. I couldn’t put this down until I’d finished it. Also very impressed with the excellent pace and the tight ending.

I couldn’t put this book down. A fast-paced gripping read with a credible plot and authentic characters. It had me hooked until the end and I can’t wait to read more of Lorraine’s books.

Add a review for Pins and Needles (#3)